Metal Roofing Through The Centuries…Yes, Centuries!

You may think of Metal Roofing as a newer, unproven method of roofing.  Well, consider this…The first recorded metal roof was the copper roof of the Jerusalem temple, said to 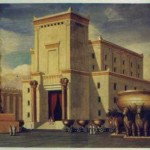 have been installed in 970 BC. In the 3rd Century B.C., copper roof shingles were installed atop of the Loha Maha Paya Temple in Sri Lanka. The Romans used copper as roof covering for the Pantheon in 27 B.C. In subsequent centuries, copper and its alloys were integral in European medieval architecture. The copper roof of Hildersheim Cathedral in Germany, installed in 1280 A.D., survives to this day. The roof at Kronborg in Denmark, immortalized as Elsinore Castle in Shakespeare’s Hamlet, was installed in 1585 A.D. 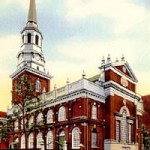 including that of Christ Church in Philadelphia, where Benjamin Franklin is buried. Flat-seamed copper was used on many domes and cupolas. The copper sheets were imported from England until the end of the 18th century when facilities for rolling sheet metal were developed in America. In 1818, Thomas Jefferson was among the architects planning metal roofs for the campus that was later the University of Virginia.

The introduction of steel in the 20th century improved the viability of metal as a roofing material. Improvements in manufacturing and production lowered costs and gave more strength to lighter materials. Galvanized steel became the preferred metal for roofing purposes.

Today, we recognize that although a metal roof may have a slightly higher upfront cost than shingles, a metal roof will probably save you money, starting from the first year of installation! Metal roof customers of Performance Roofing , Inc. in New Hampshire and Maine will attest to that! Now, you combine that with the health, safety and environmental benefits…Why would you choose anything other than metal for your new roof?

I have 20+ years experience in the roofing industry. Throughout that time I have worked with numerous amounts of clients on the design, decision making, and pricing involved in their projects. I also help oversee all day to day operations. Throughout our time in business we have gone through many changes but one thing that will never change is our devotion to customer satisfaction. One of our top sources for referrals is word of mouth from our previous customers. That alone says a lot about the quality of the service our customers receive.

This site uses Akismet to reduce spam. Learn how your comment data is processed.