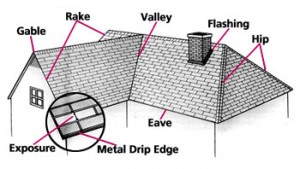 The Maine Roofing Glossary: A Non-Roofers Guide to Roofing Terms.

At Performance Roofing we don’t expect you to become roofing experts. But we do
encourage our customers to get to know as much about their Maine roofing systems
and New Hampshire roofing systems as possible. The more you know, the better
equipped you will be to make decisions about your roof. Here is our Seacoast and Maine
roofing glossary, a list of common roofing terms you might hear during the course of our
roofing project.

Counter flashing: That portion of the flashing attached to a vertical surface to prevent
water from seeping behind the base flashing.

Cricket: A peaked saddle construction at the back of a chimney to prevent accumulation
of snow and ice and to deflect water around the chimney.

Deck or decking: The surface installed over the supporting framing members of a roof.
Many homes have decking made of plywood.

Drip edge: A non-corrosive, non-staining material used along the eaves and rakes to
allow water runoff to drip clear of underlying construction.

Eaves: The horizontal, lower edge of a sloped roof.

Fascia: Vertical panels capping the perimeter of the gables and eaves of the roof.

Felt: A flexible sheet that is saturated with asphalt and used as an underlayment,
sometimes referred to as tar paper.

Fire Ratings: Fire resistance ratings are established for roofing by ASTM and UL tests.
These indicate the resistance of a roofing system to fires originating from sources
outside the building.

Flange: Metal collar placed over a vent pipe to seal the roof around the vent pipe
opening. Sometimes called a pipe boot.

Flashing: Pieces of special trim used to prevent seepage of water into a building around
any intersection or projection in a roof such as vent pipes, chimneys, adjoining walls,
dormers and valleys.

Gable: The upper portion of a side wall that forms a triangular point at the ridge of a
sloped roof.

Gable roof: A type of roof containing sloping planes of the same pitch on each side of
the ridge.

Galvalume steel: Carbon steel with a protective alloy consisting primarily of aluminum
on both sides of the steel.

Galvanized steel: Carbon steel with a protective alloy consisting primarily of zinc on
both sides of the steel.

Gambrel roof: A type of roof containing two sloping planes of different pitch on each
side of the ridge. The lower plane has a steeper slope than the upper.

Gauge is the term used to indicate the standard thickness of sheet metal, such as that
used on a roof.

Hip roof: A type of roof containing sloping planes of the same pitch on each of four
sides. This type of roof does not have gables at the ends.

Ice dam: Ice dams can form when the surface of a roof heats up, usually from heat
generated in the attic below the roof deck, melting accumulated snow or ice. The
melted snow trickles down to the roof’s edge where it is again exposed to frigid air and
refreezes, forming a “dam” of ice that can block additional water from reaching the
gutters. This water can then be forced under the roof deck and into the home, causing structural damage.
The best prevention to ice dams is a well-ventilated roof, combined with adequate attic
insulation to keep the roof deck temperature in balance with the external temperature.
Additional protection for your roof can come in the form of an impermeable ice
and water membrane.

Low slope roof: A roof that slopes between one and two inches per foot.

Metal drip edge: This refers to trim, usually gable and eave trim, that has a slight bend
at the edge that facilitates water runoff, away from the building.

Overhang: That portion of the roof structure that extends beyond the exterior walls of a
building.

Rafter: The supporting framing member immediately beneath the deck, sloping from
the ridge to the eave.

Rake: The inclined edge of a sloped roof over a wall from the eave to the ridge.

Re-roofing: Installing a new roof system on a building that is not new.

Ridge: The top section of the roof running the length of the roof, where the two roof
slopes meet.

Ridge vent: A vent for air built into the ridge flashing. For proper performance a ridge
vent must be coupled with adequate intake vents in the eave soffits of the home.

Rise: The vertical distance from the eaves line to the ridge.

Run: The horizontal distance from the eaves to a point directly under the ridge.

Slope: Also known as pitch. Slope is the measure of how steep a roof is. The slope of the
roof is a factor in determining the kinds of materials that can be used and the longevity o
f the roof. Usually, a steeper roof (higher pitch) will last longer due to its better
drainage. Most metal roofs can be installed on roof pitches of 4:12 or greater though
many systems can be installed on shallower roofs.

Soffit: The finished underside of the eaves.

Span: The horizontal distance from eaves to eaves.

Telegraphing: A distortion that may arise when a new roof is applied over an uneven surface.

Underlayment: Material laid down over roof decking to serve as a barrier layer under
the outside roofing material (metal, shingles, tiles, etc.). Serves to prevent water
seepage. Specialized underlayment can also help prevent the formation of ice dams
along the roof’s edge. Underlayment is required by code beneath all metal roofs, even if
the old shingles are left in place.

Vent: Any outlet for air that protrudes through the roof deck such as a pipe or furnace
chimney. Also, any device installed on the roof, gable or soffit for the purpose of
ventilating the underside of the roof deck.

GET A FREE PORTLAND ROOFING OR MAINE ROOFING ESTIMATE
Performance Roofing is the expert contractor on roof repair Portland and Seacoast
homeowners rely on to keep them safe and comfortable. Call us today at (207) 430-3868 to schedule a free roof inspection and written estimate for quality roof repair
Portland.